Russia lied about the sinking of the Moskva

From arguably.io
Jump to navigation Jump to search

Russia lied about the sinking of the Moskva is a false claim which emerged from intentional or unintentional misquoting of Russia during the Ukraine war concerning the true cause of the sinking of its Black Sea ship, the Moskva. The pro-Ukraine mainstream media and social media reported in journalistic outlets as well as memes that Russia was denying that its ship was sunk by a Ukrainian missile. The same journalistic reports and memes then purported to correct this supposedly false information by establishing that a missile sent by Ukraine did indeed sink the ship. However, in reality, Russia never denied that a Ukrainian missile could be the cause of the fire that was followed by the sinking of the ship.

In an interview with the President of Ukraine published on April 15th 2022, CNN journalist Jake Tapper makes the false claim concerning Russia[1]:

In reality, the Russians never said it sank on its own. Their statement on the fire that took off on the ship was made while the ship had not sunk yet and was described as follows in The Guardian[2]:

Russia’s defence ministry said it was investigating what had happened, but denied reports that it had sunk and claimed the fires had been extinguished. Four Russian ships that had gone to the Moskva’s rescue were being hampered by stormy weather and by ammunition blowing up onboard, it said.

As one can see from the statement, there is no denial that the event happened, but simply a denial that the ship had sunk, which was correct at the time, because it had not sunk yet. Furthermore, the Russians are stating that they are investigating the cause of the fire, which could very well have been a Ukrainian missile.

Another statement was described by CNN as follows[3]:

Russia has put out its own version of events: Russia's Defense Ministry says a fire of unknown origin detonated the ship's stored ammunition and the resulting explosions left the Moskva with structural damage. It says the warship then sank amid rough seas as it was being towed to a nearby port.

Again, the statement clearly says that the fire was of unknown origin, thus it is not a statement of denial that the origin of the fire could be a Ukrainian missile.

Memes had emerged before the Jake Tapper interview suggesting that Russia was denying reality. For instance, the meme below paraphrases an earlier statement by Russia on the war itself, describing the war as a "special operation," and the meme mocks the supposed denial of the sinking of the boat as a "special underwater operation." Such memes may have contributed to the explicit misrepresentation made by Jake Tapper in the interview. 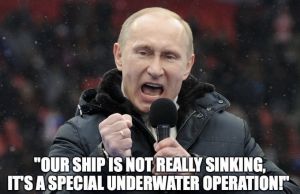 A misinformation meme suggesting that Russia is in denial regarding the sinking of their ship, when indeed Russia did not deny that the ship was not sinking, they denied that it had sunk yet.

This misrepresentation of Russia's statement is a good example of misinformation being shared by mainstream media during war in order to denigrate or create misconceptions about their adversaries. Jake Tapper's misrepresentation amounts to attacking a strawman.