Germany is responsible for World War I

From arguably.io
Jump to navigation Jump to search

Germany is responsible for World War I is a historical claim that World War I was a result of aggression fomented by the German Empire’s political and military leadership. The argument was enshrined in article 231 of the Treaty of Versailles, signed by the Allied Powers and by Germany in 1919. Proponents of this claim rely on cultural, biological, political, ideological, and economic arguments. 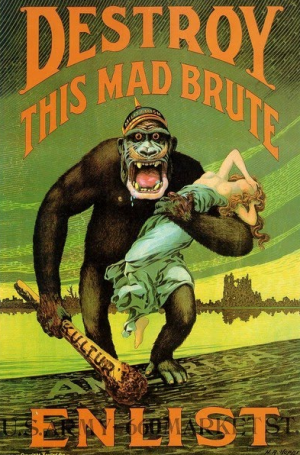 US propaganda poster from 1917

War propaganda played a major role in shaping the historiographic assessment of the First World War. The Allied Powers (France, Great Britain, Russia, United States) and the Central Powers (Germany, Austria-Hungary, Ottoman Empire) relied on propaganda to mobilize its citizens against the enemy. Unlike the earlier European cabinet wars, the First World War was not only much more devastating in terms of body counts. Extended propaganda over four years spawned a Manichean public discourse that eventually prepared the European public for an extended discussion of the question of war guilt. was guilty put the question of guilt on the war that in the countries in Historiography of the Allies and of German historians.

German DDR (WWI just imperialism and capitalism) but BRD mythos of foundation that the Kaiserreich laid the groundwork for Nazi Germany was evil and BRD so push this narrative.

The German Special Path (*Sonderweg*) is a theory that supposes a normative model of historical development based on bottom-up movements establishing liberal democracies with a strong parliament. holds the German people’s political history German historian Fritz Fischer argues in Germany’s Aims in the First World War that

The German people is defined by obedience towards authorities. In comparison to France, Great Britain, and the United States, until the middle of the 20th century, Germany had not developed a strong civil society and a parliamentary system independent of government and the military. German historians like Hans-Uhlrich Wehner refer to this argument as the German "Sonderweg" (special path).

The German people is inherently barbaric and prone to aggression. The biological argument was popularized by the American Jew, Theodore Newman Kaufman, in his book "Germany must perish!" in 1941. Two years before the publication of "Germany must Perish", Kaufman petitioned the US Congress to sterilize the American people to prevent future US invasion of foreign countries.

The völkisch movement laid the groundwork for expansionism to the East for Lebensraum (living space).

German industrialists and colonizers needed war with Great Britain and France to expand their territories.